All questions and statements collected at the GEN News Summit 2013 in Paris.

1. How well do you know your audience?

— David Cohn, Director of News for Circa.

3. Are we talking too much about tools and too little about culture change?

4. The future of news design is about how content is created, not how it is presented.

– Oliver Reichenstein of iA. Also, this:

Interesting reframing of responsive design by @reichenstein: responsive not to devices, but people. #GEN13

5. Journalists need to be a lot more aware of data security.

6. Who, what, when, where have been commoditised. Journalism needs to focus on why, how, what next.

– David Levy from the Reuters Institute for the Study of Journalism.

8. The many new faces of the unit formerly known as the article.

– One of the overarching topics of the summit. Mobile is further challenging the notion of the article as the default format for delivering news and telling stories. Circa‘s idea is to «atomise» the article, Fast Company is experimenting with «slow live blogging». See also: What is an article?

9. The best games for mobile are built for mobile, not adapted from desktop.

— David Cohn, Director of News for Circa.

10. The metrics for success we use are old, industrial, wrong metrics.

11. What if we made engagement as important as consumption? 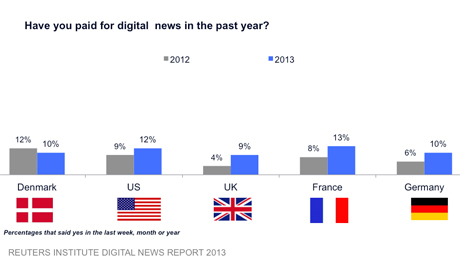 – from the Reuters Digital News Report 2013, see Digital news is finally starting to pay in The Guardian.

– Because paywalls are still more wall than pay. Here’s what bp;dr stands for.

14. Rule if you want people to pay for your content: It doesn’t matter if you value it, but if they value it.

– David Levy from the Reuters Institute for the Study of Journalism. Pro Publica’s Paul Steiger seconds: «Part of our mission is to improve people’s lives. If we do that, revenues will follow.»

15. Do you think business models based on intruding privacy more and more are sustainable?

– Question from the audience after Jeff Jarvis had preached that media companies need to – you guessed it – learn from Google and make better use of data.

At Global Editors Network hearing about being a journalist in Syria. US journos complaining about low CPM's #FirstWorldJournoProblem

18. The past does not buy our future. Without taking risks, each dollar in profit will turn into $0.56 of loss within 5 years.

– John Paton, CEO of Digital First Media. He had his entire presentation tweeted out while he was still on stage.

19. Bad CEOs and worse editors are using the past to kill our future. See it as your Occupy-moment. Demand change of your bosses.

20. When using social media platforms, ask yourself: 1. Who benefits? 2. Who’s in charge?

21. Your smartphone is your newsroom.

– Robb Montogomery, consultant for multimedia training. He knows what he’s talking about. This is a video of his, filmed with an iPhone.

22. The big red button to make the internet go away again: Would you press it?

Bonus: The one rule to rule them all

«Rule of the internet: It's cheaper and easier to try than to debate about trying». Mark. these. words. @digidave at #GEN13

This is what stuck with we. If you’re looking for a more comprehensive summary of the issues discussed at the summit, have a look at GEN’s Storify page. Since most of the time, two sessions were held in parallel, I’ve inevitably missed a good part.

As the digital strategist of TagesWoche, I’m working on finding solutions for these very challenges. If you have ideas about how we should address specific issues or think that we could collaborate on one or the other, get in touch.

For more on journalism, technology and their intersections: Follow @davidbauer

My work has appeared in Neue Zürcher Zeitung, The Guardian, Quartz, Spiegel Online, Das Magazin, Tages-Anzeiger, SonntagsZeitung, TagesWoche, among others.

A simple, tricky game. Played more than one million times in over 200 countries.